Across oceans and cultures, on September 11

Across oceans, across language, across culture, their gift could not have communicated more clearly to total strangers. 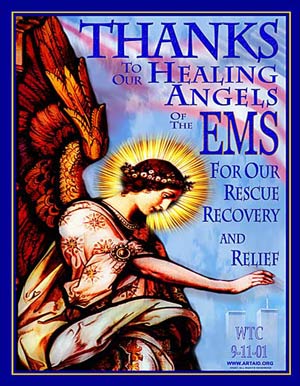 There are always moments amid the wreckage of what is worst in the human race, when we see clearly what is best in it. Even on 9/11.

There were those who walked toward trouble to allow the rest of us to walk away from it – the fire fighters, police officers, and in the case of 9/11, EMTs and Port Authority Police. They, like us on that day, had other concerns. . . kids to raise, bills to pay, oil to change. They put it all down and walked toward the horror to help strangers.

But of all the stories of human kindness following the terror of 9/11, one story in particular stuck with me.

The Masai tribe of Kenya had raised money to send their native son Kimeli Naiyomah to medical school in the United States. He happened to be in downtown Manhattan on 9/11. He later returned to tell his tribe of what he witnessed.

“What happened in New York City does not really make sense to people who live in traditional huts, and have never conceived of a building that touches the sky,” explained Ibrahim Obajo, a freelance reporter working in Nairobi. “You cannot easily describe to them buildings that are so high that people die when they jump off them.”

What then did the Masai do for the most powerful nation on earth? They gave us cows. “They gave what is truly sacred to them,” Obajo said.

Across oceans, across language, across culture, their gift could not have communicated more clearly to total strangers.

As we try again today to make sense of this senseless act and pay tribute to its heroes, I can’t help but think that the task ahead of us, beginning at the moment the first plane impacted the first tower, has a lot to do with summoning in ourselves the generosity of spirit shown us by the Masai – as we walk away from the darkness of human nature exemplified by the terrorists of that day. Even as we are at war and contemplate war, even as we disagree vehemently with each other on how to proceed, we can call on the higher angels of our human nature to reach across miles and language and culture to strangers. It will require everything in us to not become the hatred and intolerance we’re fighting.

I think we’re up to the task.

And maybe while we’re at it, we can save a bit of that generosity of spirit for each other.

Header photo credit. (Graphic from ArtAid.org, available for use for non-commercial purchases)

Affordable to Whom?
Part of a Discussion on Affordable Housing for the Village Square's Dinner at the Square event.