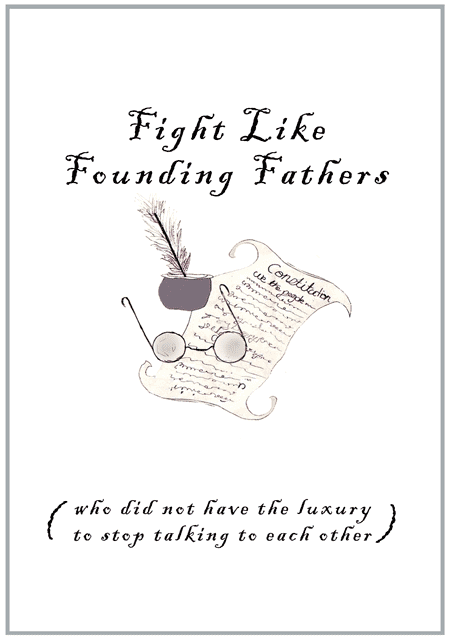 Fight Like Founding Fathers (who did not have the luxury to stop talking with each other… if they had failed, they would have been hanged). Disagree – even enthusiastically – without making it personal. Find an honest, factual civic conversation somewhere and jump in. Embrace the disagreement; it’s what makes us America. It was one of our Framers’ most brilliant insights that differences of opinion generate better ideas and protect the freedoms we enjoy. James Madison called the Bill of Rights “a mere parchment barrier” compared to the power of faction to protect democracy.

Read up on the very American “Founding Tale” of Thomas Jefferson and John Adams – and their nearly lifelong disagreement – here. Host a Jefferson Dinner here.

The dynamic engagement of ideas inside the rough-and-tumble of a political campaign – no matter how challenging it gets – really does teach us important things about the country we live in – and it can build our character as a nation. So remember the silver lining and jump into the ongoing conversation of democracy. Think of the people who drive you crazy as the indispensable partners in governing that our Founders designed them to be. 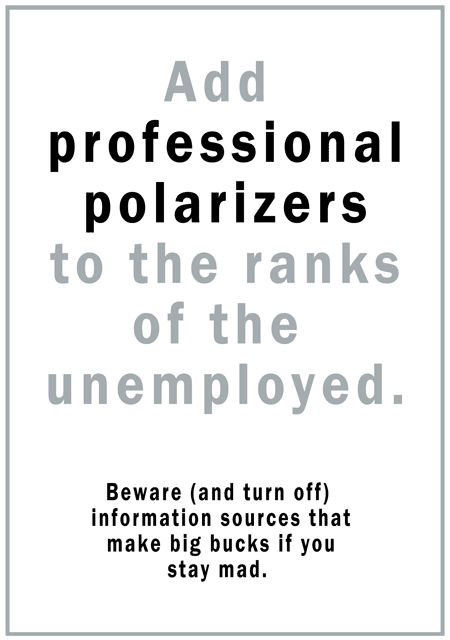 Add professional polarizers to the ranks of the unemployed. Beware (and turn off) information sources that make big bucks if you stay mad.

What passes for political “dialogue” these days wouldn’t be tolerated between 5-year-olds at recess. We’ve turned “talking” over to professional polarizers on television who make seven digit careers surfing this wave of hostility. They warp what were once perfectly useful ideas, when understood in moderation, into black and white caricatures of ideas, so oversimplified they become effectively useless in solving real problems. These entrepreneurial yellers build for us such a fundamental misunderstanding of (and contempt for) people who think differently than we do, we’ve stopped bothering to listen to each other at all.

We say let’s just bring down their market share. What’s a handful more people looking for jobs in these hard times? The bonus? Saves you money on therapy while it brings your blood pressure down. 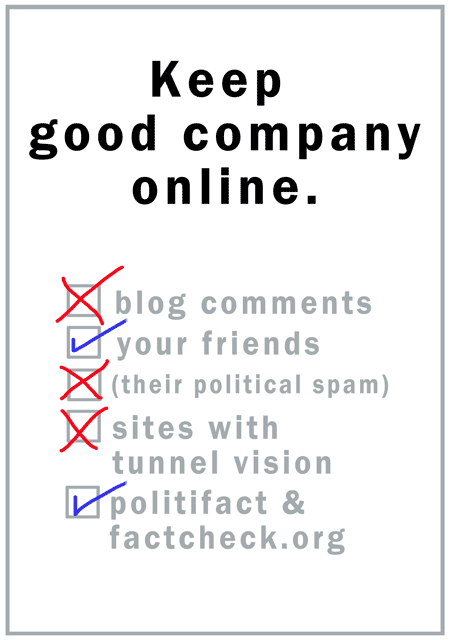 Keep good company online. DON’T read blog comments. If you read blog post comment threads, please for goodness sake stop. This will damage your level of sanity more than almost any single act.
DO talk to your friends but...
DON’T read their forwarded junk emails. Just because you love Aunt Sue doesn’t mean she’s fact-checked her spam. Breathless and delusional emails have done an amazing amount to damage our civic debate. (Note that you can write anything in an email. Try it, open a brand new email and just start typing…)
DO make SNOPES.COM one of your favorite sites. If you do want to fact check an email, www.snopes.com is a truly wonderful source.
DON’T pay too much attention to web sources (or any other) that has a fixed point of view. Do they always hate all Republicans/Democrats? Will they ever change their mind? If not, why are you paying attention to them?
DO use solid fact-check websites like Politifact and FactCheck.org. 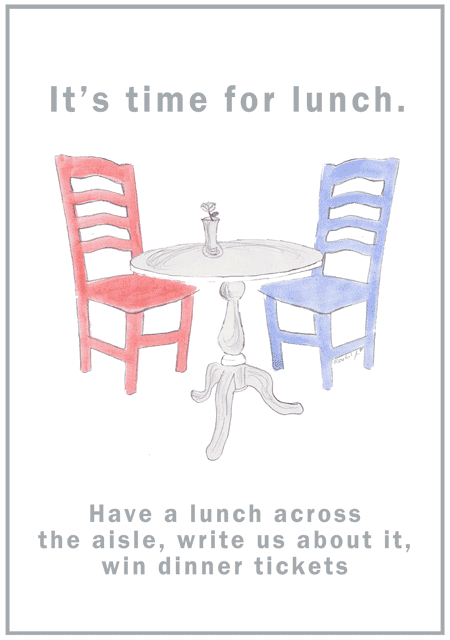 It is is surely time for lunch. Have lunch with someone across the aisle. If you write us about it and email it to lunch@villagesquare.us we’ll enter you and your friend into a drawing for dinner tickets (odds are high).

We were inspired to offer incentives for people to simply have lunch by Patricia Nelson Limerick in her New York Times column “Dining with Jeff,” which we read aloud at our very first Village Square dinner in 2006. Nelson writes of her husband and John Adams’ quote “…You and I ought not to die until we have explained ourselves to each other”:

I fell in love with this quotation 30 years ago, about the same time that I fell in love with Jeff Limerick, and for some of the same reasons. Honest, self-aware and articulate, Jeff made “explaining himself” into an art form, but his performance soared past his fellow mortals when it came to the tougher side of this transaction. Jeff had a genius for listening and giving people the best opportunity to explain themselves and to become his friend.

On Feb. 1, 2005, Jeff died of a stroke. Having trained with a master, I carry on with the methods I learned from him.

When I find myself puzzled and even vexed by the opinions and beliefs of other people, I invite them to have lunch. Multiple experiments have supported what we will call, in Jeff’s honor, the Limerick Hypothesis: in the bitter contests of values and political rhetoric that characterize our times, 90 percent of the uproar is noise, and 10 percent is what the scientists call “signal,” or solid, substantive information that will reward study and interpretation. If we could eliminate much of the noise, we might find that the actual, meaningful disagreements are on a scale we can manage. 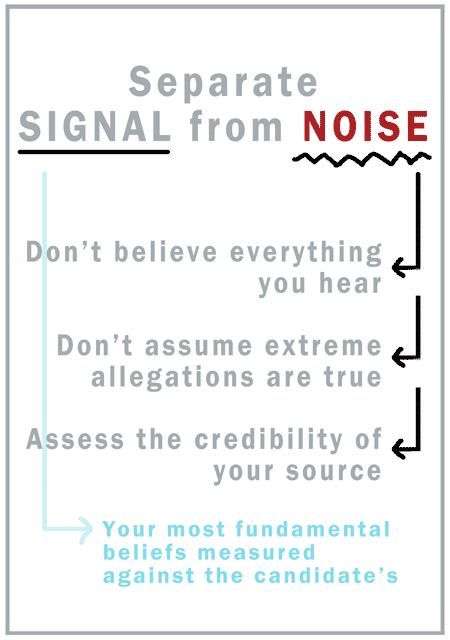 The Limerick Hypothesis (above) leads directly to our next survival guide tip. Much of what we’re all worked up about simply isn’t so.

NOISE: Don’t believe everything you hear
NOISE: Don’t assume that extreme allegations are true
NOISE: Assess the credibility of your source
Signal: DO measure the fundamental beliefs of a candidate against yours and vote accordingly

Don’t cast your vote based on a 30-second ad (especially if the ad has scary breathless music). This will be the ultimate citizen revenge against ugly campaigning and this ad cost the candidate roughly 8 zillion dollars. Mwahahaha.

Vote early, then step away from the television set.

While everyone else is being pelted with toxic TV ads, you’ll be fishing. 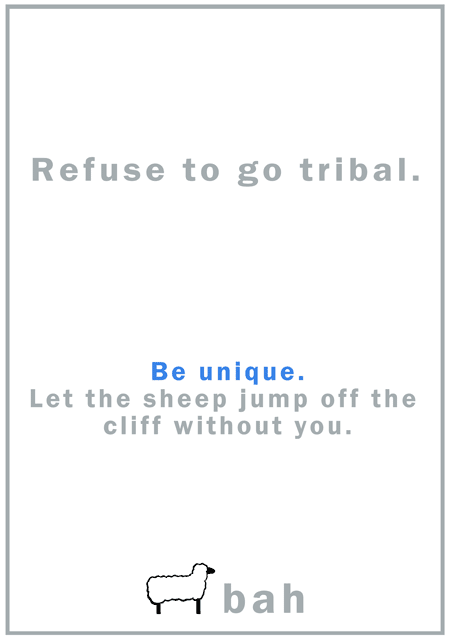 Refuse to go tribal. We are having real difficulty as a society with the rise of tribalism. And why wouldn’t we be? Technology has made it so we can always have it our way – we can turn on the news source that feeds our pre-existing opinion, we can google the reality to believe exists and find confirmation for it.

Author Bill Bishop describes in his book The Big Sort that it isn’t just in news consumption and online where Americans are increasingly keeping the company of the people who agree with them – it’s in the churches we attend, the clubs we join, even the neighborhoods we live in.

Problem is, like-minded groups consistently behave the same way: They grow more extreme in the direction of the majority opinion, even to the point of being willing – as a group – to deny factual reality. We bet you’ve noticed this phenomena when you observe the people you disagree with. All this means that groupthink is on the rise. So why not be unique? Let the sheep jump up the cliff without you. Bah. 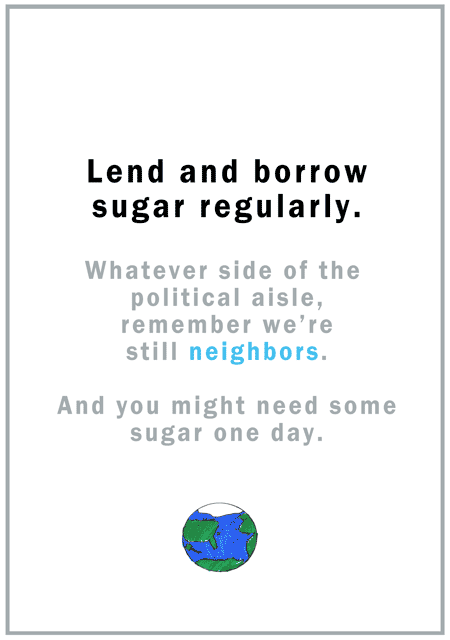 Lend and borrow sugar regularly. Despite all the disagreement afoot in America, we’re still neighbors. We think we ought to act like it.

In this environment of “tribal” information sources, local disagreements tend to be seen simplistically through the prism of the divide on national issues, as skirmishes in a country-wide partisan war rather than the unique and complex local situations they usually are. It’s our national dysfunction taken root in hometown America, and it’s not helping us make good decisions where we live.

So at the very time when we most need to bring our “A” game to solving civic problems, our conversations too often consist of stomping on toes, throwing sand, and various other playground antics. When a town hall meeting is held, it tends to become a venue for villagers with pitchforks (rude signs anyway) to vent their rage.

In the seven years since we first dreamed up the notion of The Village Square – an organization dedicated to restoring constructive conversation across the partisan divide – we repeatedly return to the same truth: Washington is never going to fix this for us. If we want it to be different, it’s going to be neighbors like us in hometowns like this one who get it done. This is where we share carpools, softball teams and borrow cups of sugar.

Do you have an addition to our survival guide list? Tag @VillageSquareFL and we’ll tweet them out.

Karl Rove: “James Carville and I agree on just one thing: Do not read this guide.”

Glenn Beck: ?(Furiously scribbles something on a blackboard.)

***LEGAL DISCLAIMER: THESE QUOTES ARE WHOLLY FICTITIOUS AND ANY SIMILARITY TO ACTUAL UTTERANCES BY ANY INDIVIDUAL LIVING OR DEAD IS PURELY ACCIDENTAL. IN NO EVENT SHALL THE VILLAGE SQUARE BE HELD LIABLE FOR ANY DIRECT, INDIRECT, INCIDENTAL, PUNITIVE OR CONSEQUENTIAL DAMAGES OF YOU NOT GETTING THE JOKE AND PRESUMING THESE QUOTES ARE REAL. OPINIONS OF THESE INDIVIDUALS CANNOT BE ASCERTAINED BECAUSE WE HAVE NO INTENTION OF ASKING THEM SINCE WE KNOW FULL WELL THAT IF ASKED WHAT THEY THOUGHT OF THE VILLAGE SQUARE THEY WOULD SAY ‘WHO?’

LEGAL DISCLAIMER IN ENGLISH: At the risk of stating the obvious, none of these people said any of these things.

LEGAL DISCLAIMER IN CONSERVATIVE: IF YOU WEREN’T SO OBNOXIOUS WE WOULDN’T NEED TORT REFORM.

Living right by Alexis de Tocqueville
It was probably our founders’ biggest idea – and assuredly their boldest – that a diverse people could self-govern.

Across oceans and cultures, on September 11
Across oceans, across language, across culture, their gift could not have communicated more clearly to total strangers.